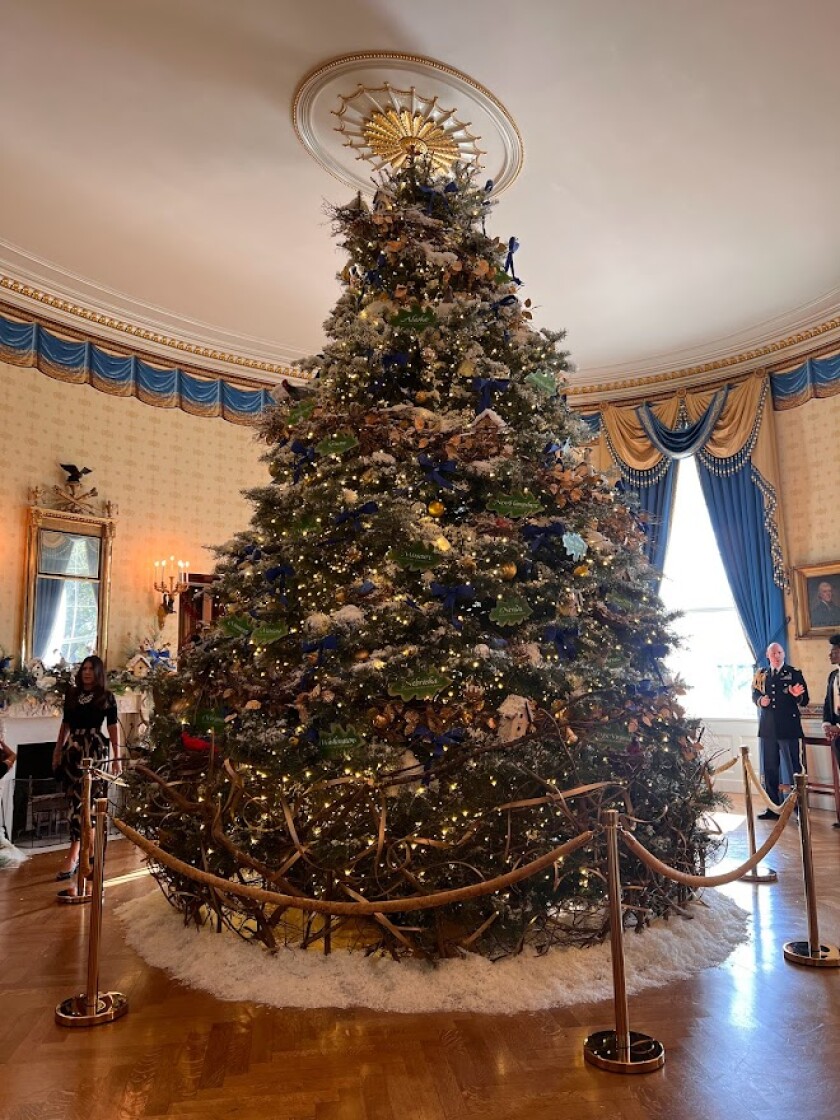 DULUTH — Each year around Thanksgiving, volunteers from every state in the union convene in Washington, D.C., to spend several days custom-crafting decorations to fit a theme selected by the First Lady (or, as the case may be in the future, the First Gentleman).

Kynze Lundeen, of Duluth, knows about working under pressure: She’s vice president at Lundeen Productions, an event and marketing company founded nearly 50 years ago by her father, Tracy Lundeen. It’s the company behind events including the Duluth Wedding Show, the Duluth Women’s Expo and Festival by the Lake.

Lundeen has now joined the White House decorating corps twice: first under the Trump administration in 2020, and then again this year with the Bidens. Earlier this month, the News Tribune reached her by phone to learn about the highly involved process of preparing the United States’ most visible residence for a busy holiday season.

This interview has been edited for clarity and length. A complete virtual tour of this year’s White House decorations is available at

Q: How did you get started in White House decorating?

A: I used to be involved in politics pretty heavily. I was on the board for the Minnesota Young Republicans, and the president at the time sent me the application. … He said, “Don’t get your hopes up. It’s pretty competitive. Fill out the application, and see what happens!”

Q: How long do you spend out in D.C. for the process of decorating?

A: Under the Biden administration, I was accepted for the full week, so I flew out Saturday, Nov. 19. You’re working Monday and Tuesday at a White House warehouse, so it’s an off-site facility. Then Wednesday, Friday, Saturday and Sunday, you’re at the White House decorating. They do give you Thanksgiving Day off.

Q: What was your role specifically?

A: I was one of 150 volunteers. They pick one from each state, and then the rest are funneled in from the D.C. area and surrounding areas. You show up (on the) first day. You get your team, you meet your group, and then (my team was) assigned five rooms in the White House. They show you the vision of each of your rooms, and then you literally start creating that vision.

They do not buy pre-made items. You are physically making those items as you go along, so anything that you see in the White House has been handcrafted. All day Monday, all day Tuesday, we were painting boxes, we were making birds for the trees. We were painting stripes on the boxes. I never want to paint another box again. Hot gluing bows to ornaments, really anything that you can think of, in those first two days, we were doing it.

Then Wednesday, you show up to the White House and you finish any of the crafts that you have to do, and then you immediately start decorating each of your rooms. That takes all day Wednesday, all day Friday, all day Saturday. Then Sunday, you have until noon, and then you clean everything up.

You’re there from sun up ’til sundown. I think we got there at 6:30 in the morning, and didn’t get home until 7 at night. It was extremely intense, but having the background that I do … I mean, event weeks look like that back home, too.

Q: You mentioned you’re volunteering your time. Do you also pay for your travel and accommodations?

A: We pay for everything. They were able to get a discounted rate at the Hotel Washington, and then they take care of breakfast and lunch each day. Then we’re kind of on our own for flights, dinner and any sort of travel.

Q: Despite the expense and time commitment, you must have enjoyed it enough the first time to want to go back and do it again.

A: Yes, I love this kind of stuff. I think it’s an absolute honor to say that you decorated the White House under two administrations. I thought it was cool as heck, and you get to meet so many great people from across the country.

Q: Who creates the overall concept for the decorations?

A: The First Lady has the initial design plan, and she works with the White House curator. They create a vision, they pick a theme. This year’s theme was “We the People” … They literally start planning the minute Easter’s over, and they go through each room.

For example, I had the Library Room. … Basically, we were making Christmas trees out of books, and we were gluing moss to these boards, and then the preamble (to the Constitution) was actually glued to the boards. So it’s connecting our history of the United States as well as our stories individually.

The China Room was “Family Tradition,” so each of the volunteers got to bring a family traditional recipe. My family’s recipe card is actually glued to a White House tree right now, which is super cool.

Q: Melania Trump and Jill Biden are quite different people. Were there any differences of tone or personality between the two experiences you had?

A: They were both very good experiences. … They only thing that you could tell differently about the two administrations was the party that they had for the volunteers.

For example, in 2020, the volunteer appreciation party, you had more run around the house. You could go from room to room. The only thing that was planned was when Melania came down and spoke. She actually came down from the residence and spoke to the people. … They had (meat) carving stations for the volunteers; they had an open bar.

Whereas this year’s reception was … you went outside, you got a picture with Jill Biden, she talked for a little bit. Then we went inside, and she gave another speech, and then they had little butlered appetizers, and you had like 30 minutes to look around the house.

The White House staff treated us amazing both times. … The only drama comes from the volunteers ourselves, because there are so many different personalities that are working together on this. You come to the White House to help create their vision, not your own. That could be tough for some people, if they don’t like how something looks. It’s not your decision to make.

Q: Have you made many friends who you’ll stay in touch with?

A: Yeah … it’s a family at this point. You spend so many hours together and you deal with so many things and a lot of changes that you go through all the emotions together and, at the end of the day, put your feet up, talk about how interesting your day was, and have a glass of wine.

Q: Having now done this twice, what have you learned?

A: I’ve never been much of an actual crafter, because I’ve never really had to be and I don’t have time for it. … In events, you’re learning on the job, and you’re figuring things out as you go, so I was able to learn a lot of things like painting and woodwork crafting. … We actually had a Christmas event the Thursday I came home, so I literally crafted our entire design of the event and was putting centerpieces together.

You don’t get to screw up anything at the White House. You really have to learn as you go to make this vision beautiful. … I just felt so motivated by the time that I got home because it’s very exhilarating. … When I came home, I was extremely motivated, and all of our shows are coming up, so now I have all these crazy ideas that I want to complete and work with our vendors to cultivate these visions.