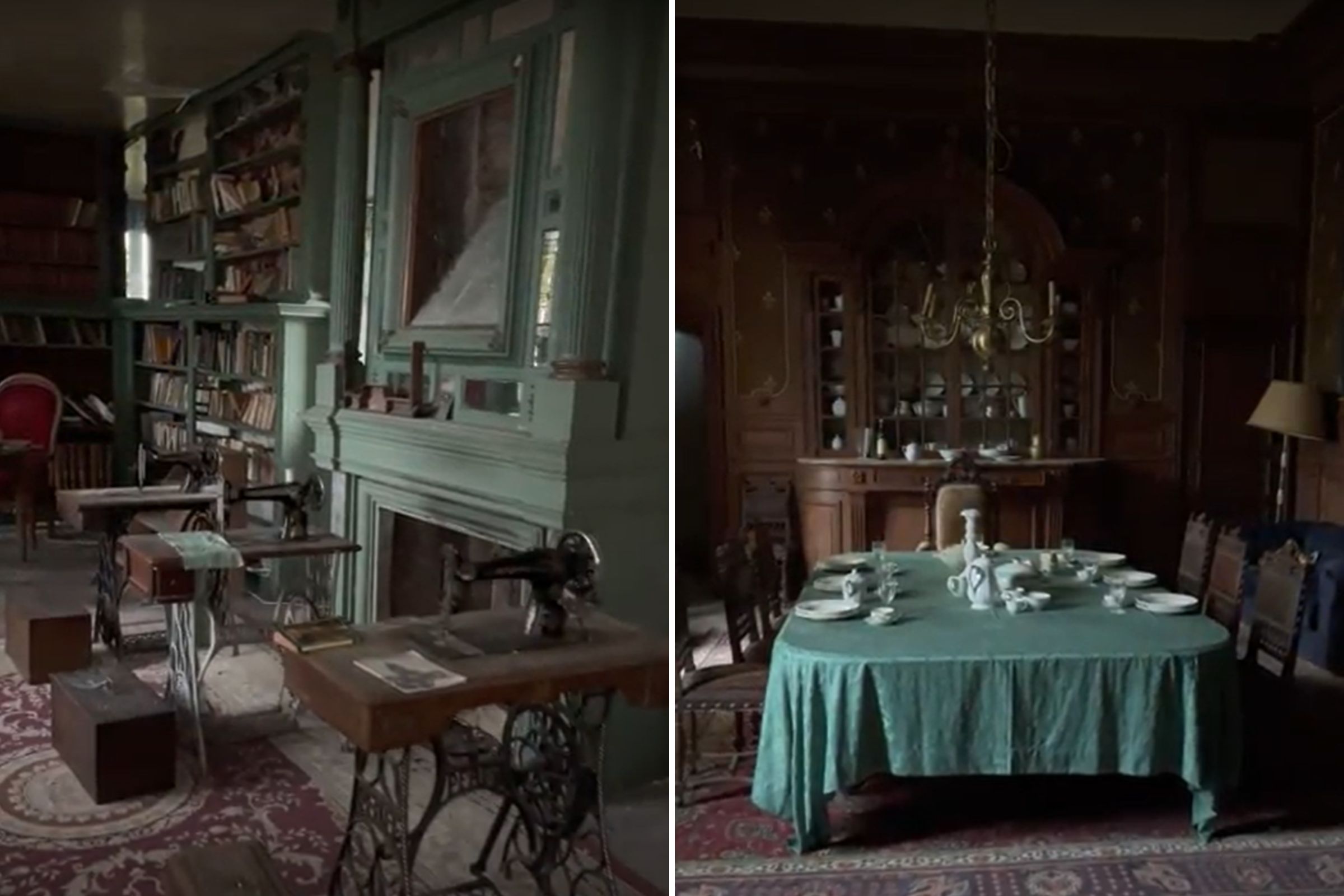 An urban explorer has shared the inside of an “abandoned” French castle, which is still full of furniture.

New Yorker Ramy Awad traveled to Europe after hearing about the sprawling estate, said to have once been owned by a passenger aboard the Titanic.

He shared a clip of the interior to his TikTok page, @yoitsramy, earlier this month, where it amassed more than 10 million views.

Urban exploration is defined by the Collins Dictionary as “a recreational activity in which people explore derelict urban structures.”

Exploring abandoned locations is a gray area legally depending on the location and entry method. It usually falls under trespassing.

Various blog dedicated to the pastime share tips for potential explorers, with one, Obsidianurbexphotography.com, warning: “There are structural dangers if the building is dilapidated and crumbling.

“Floors and ceilings may collapse without warning as you move around. There may be broken glass on the floor or sharp pieces of metal, or on ledges while you are climbing.

“Older buildings may have asbestos or toxic lead-based paint. Industrial sites may have a wealth of hazards, including toxic or carcinogenic chemicals.”

They also warned of fall hazards and sudden drops, as well as “naturally occurring biological hazards,” coming from mold, fungus and faeces.

Fleshing out one of the dangers, website Asbestos Justice underlined health risk associated with older buildings.

They said: “As many of the abandoned buildings lie derelict and in a poor state of repair there are inherent dangers in urban exploration, with unsafe floors and broken glass being present at the sites. There may also be hidden dangers, such as asbestos.

“Apart from the health risks of urban exploring, there are also legal issues as trespassing may be involved. This would cause problems if someone were to go on to develop an asbestos condition. As urban explorers are not employees of the companies that own the buildings, occupier’s liability insurance would have to be traced, which could prove most difficult.

“Additionally, if explorers had broken in or scaled fences to get into sites, it could be said that they were there illegally and potentially no asbestos compensation could be recovered.”

Speaking to Newsweek, Awad, who’s been urban exploring for 8 years, said: “This is a Neo-Renaissance style castle that was built in 1868. There are over 100 rooms and well over 20 bedrooms. The castle also has a private chapel on the first floor.”

He recalled getting to the property, saying: “After finding out about the rich history of this castle I instantly fell in love, and 2 weeks later I had booked my ticket to France.

“Getting inside was complicated as you have to hike through thick woods and uneven terrain to arrive at this beautiful castle. When I was exploring inside, I was hit with a great deal of emotions.

“The rich history combined with knowing that once great memories had taken place here really got me.

“While exploring the castle we found a really unusual rope in one of the upstairs servant bedrooms that came down from the ceiling, and it seems to open a panel with a secret room on top. None of us would dare to climb up there to check.”

The interior echoed its once grand past, with luscious rugs, upholstered chairs and expensive wallpaper, albeit peeling in places, still inside. The dining room held crockery in the cabinets, while the table was laid with what appeared to be fine china.

Pictures hung on the walls, beds with duvets and pillows sat in rooms filled with trinkets, and books adorned grand bookcases, while a child’s doll and pram sat eerily by the imposing staircase.

“One thing that really upset me while exploring was seeing that others have vandalized and graffitied the staircase.

“This broke my heart to see history being treated so badly. The smell of black mold and old furniture fills the air inside the castle,” Awad noted. One of the most unique rooms was an all-green interior filled with vintage sewing machines.

He told Newsweek: “My favorite room by far was a room where they had knitting stations (probably for the servants). It had this beautiful hue of green inside the room.”

Awad claims the lavish property was once home to Norwegian businessman, Engelhart Cornelius Østby, who died in the maritime tragedy, on April 14, 1912.

Østby, born in 1847, was a jeweller, and married Lizzy Macy Webster, according to Encyclopedia-titanica.org, and they have five children, four sons and a daughter, before she died in 1899.

Østby was a first-class passenger and boarded with his daughter, Helen Ragnhild Ostby. She survived, but her father perished. Østby’s body was recovered and he was buried in Providence, Rhode Island.

Awad claimed he came across paperwork inside the castle linking the Norwegian with the castle.

He stated the castle, located in the Bourgogne-Franche-Comte region of France, has been abandoned since 2003. Awad requested the name be kept under wraps, in a bid to deter further deterioration of the castle.

That was echoed by a group set up in 2020 dedicated to its preservation, who have a petition on Change.org calling for action to restore the structure.

“During the summer of 2020, it had become one of the most famous castles in the Urbex world,” it says, translated into English. It claims the castle has current owners, but described them as “absent.”

“The association has decided to take matters into its own hands by reducing vandalism, by covering the broken windows and the doors for some destroyed by the vandals,” the petition said.

While they also noted highlighted the damaged stairs, saying: “The castle’s staircase has been entirely tagged and further significant damage is visible.”

Commenting on the video online, Purple PretzelIt’s said: “Such a waste of a beautiful home.”

Dyvf9h2dqfbt thought: “Reminds me of the house of young Vecna in Stranger Things.”

“it infuriates me so much when I see people graffiti in beautiful relics such as this and destroy its beauty,” @skyethefox24 added.

Like fast fashion, ‘fast furniture’ is a problem for our planet