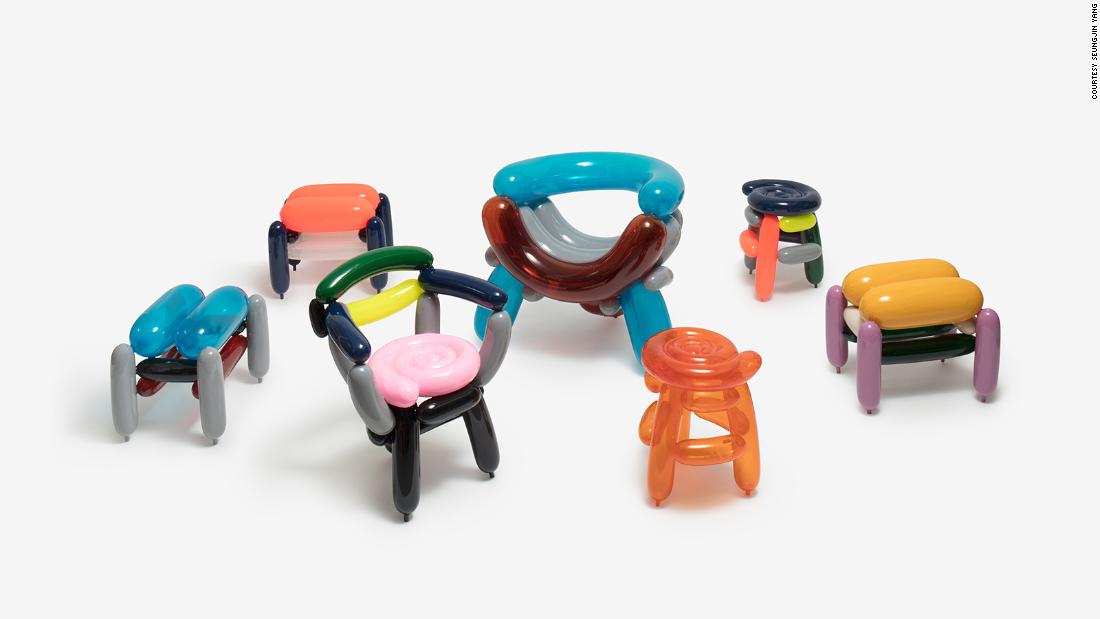 Plump, plush and — for want of a better word — squishy fittings have dominated homes and Instagram feeds alike since the 1970s design revival began approximately two years ago. Vogue anointed puffy furniture “2021’s most delightful home trend” last May, while the New York Times offered up the pervasiveness of squidgy couches, chairs and poufs as akin to the pandemic-induced sweatpant craze of 2020. A velvet ’70s armchair by Tobia and Afra Scarpa — “the Soriana” — can set you as far back as £6,461 (around $7,800), while a perfectly rendered doughnut pouf by New Zealand designer Sabine Marcelis costs €1,599 ($1,640).

But while Scarpa and Marcelis’ creations encourage a soft, sinking, seating experience, there’s one designer turning the bubble trend on its head. South Korean artist, Seungjin Yang, makes candy-colored, bulbous chairs, stools and benches with a twist — his pieces are made out of actual blow-up balloons. Since graduating in 2013 from Hongik University in Seoul, Yang’s main design endeavor has been fashioning sturdy, structurally sound furniture from the rubber party favors.

Each furnishing takes around two weeks to create, and Yang says they “cannot be burst” thanks to a special coating of epoxy resin. “My work is glossy when it’s completed,” Yang told CNN over email. “Some people think (the finished product) won’t be hard, but it is hard.”

Balloons are inflated and then molded into various shapes to form each part of the design. For example, a stool has 3 “legs” and a longer balloon is made into a spiral shape for the seat. Colored resin is applied in layers; with more coats needed in order to make the delicate material strong enough to carry weight. Once all the elements are dry and solid, the furniture is assembled and dipped into the resin one final time.

The artist’s striking portfolio — which looks like the aftermath of a child’s birthday party at first glance — has caught the eye of design aficionados, some of which have shown at various design and craft festivals. In 2021, Dior commissioned Yang to reinterpret the fashion house’s iconic medallion chair for Milan Design Week, alongside 16 other artists and designers. “For me, adults can still play like children,” he said in a video promoting the event.

The artist is currently planning to exhibit for Design Miami this November and hopes to hold a solo show in New York early next year. He is also looking to push the limits of balloon design further yet with bigger pieces down the line, like making a two-person sofa.

See the gallery above for a look at the artist’s on-going “Blowing” series.

Like fast fashion, ‘fast furniture’ is a problem for our planet