Learning plants and design from a good book 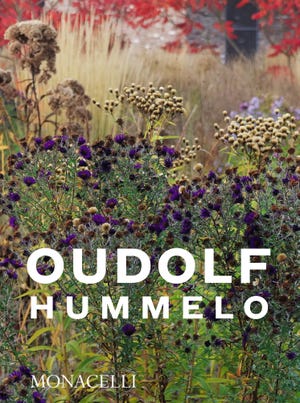 Here in New England winter is long, especially for gardeners. We want to be outside in the garden but most days we can’t really do much. I compensate by learning about gardening from books. I recently finished a good one, “Hummelo: A Journey Through a Plantsman’s Life,” by Piet (which is pronounced Pete) Oudolf and Noël Kingsbury.

With more than 400 pages, it might seem daunting, but I’d estimate that nearly half of those pages are color photos of the gardens Oudlof designed, with plenty from his home in Hummelo, Netherlands. It is written by Kingsbury, a well-known British garden writer, and by Oudolf himself.

Oudolf was the primary designer of the High Line gardens in New York City, a garden planted on a section of an abandoned elevated railway line in midtown Manhattan. This 1.45-mile planting is consistently rated in the top 10 most visited places in New York City.

The book follows Oudolf’s life as a garden designer and plantsman. In addition to the High Line, he designed gardens in Chicago and Detroit and many in Europe. The book follows his professional life and illustrates the changes. Many plants in the photos are not labeled, but more advanced gardeners will recognize them, and many are mentioned in the text. Although some common names are used, most are identified by the scientific names with the genus, species and cultivar, which I find helpful when studying the plants and finding out if they are hardy in my zone.

So what makes Oudolf one of the most famous garden designers ever? First, he is a highly accomplished plantsman. When he specifies plants for a garden, he knows what they need to do well. He started out with his wife, Anja, growing most of the plants he used in his designs, often growing and selecting plants for years before using them.

He knows each plant, including its root system and its capability to fill in spaces by seeding in or spreading by rhizomes. He grew and used plants that were largely disease resistant. His gardens rarely need to be replanted because the plants seldom fail. I should note that now he does not grow his own plants; he just specifies them and has others grow them for him, often from stock he perfected.

Oudolf uses many tall grasses in his designs. He loves the way they add structure and form to a design, and that they last well into winter. He is less interested in color than other designers. He loves the look of seed heads and stems after the (relatively short) bloom period is over. He is quoted in the book as saying, “A plant is only worth growing if it also looks good when it is dead.” Since he bred plants for toughness, I assume he means dormant, not dead.

Oudolf is a rule breaker. He has tried things that others had not. He says, “I discover beauty in things that on first sight are not beautiful. It is a journey in life to find out what real beauty is — and to notice that it is everywhere.”

Early in his career, Oudolf used large blocks of a single species of a plant. But as he refined his designs, he started intermingling a few large, tall plants inside a block. He planted them repeatedly, as repetition adds a sense of unity and coherence to a garden. Unlike many designers, he actually lays out his gardens himself instead of drawing a plan and handing it off to gardeners. Oudolf is first and foremost a gardener. He loves plants and knows them like his ever-present dogs.

What did I learn from this book? Given a large space to design, like Oudolf, I would largely use native plants. They are tough and, if properly sited, will last well. I like his philosophy that plant diversity is good, but that too much diversity can overwhelm our ability to appreciate the whole.

I am, by temperament, a plant collector — I want to try lots of plants. But seeing the photos of Oudolf’s gardens, I recognize that by buying — or growing — several plants instead of just three (my usual purchase), I can create a more powerful display.

Reading this book, I made notes of plants I want to try. Among these is Eryngium giganteum, a sea holly that gets to be 3 to 4 feet tall with spiny, egg-shaped blossoms and white bracts. Miss Willmott’s Ghost is readily available online, though I have never seen it for sale in a nursery.

Another plant that looks great is Agastache nepetoides, yellow giant hyssop. It is deer-resistant and big, growing to 6 feet tall with flower spikes up to 16 inches long. In fall and winter, the dry seed heads are fabulous, particularly in counterpoint to dry grasses.

I feel blessed that I was able to meet Oudolf and interview him at his home in Hummelo, Holland, in 2007. He was very generous with his time and his knowledge.

This wonderful book was produced by The Monacelli Press, and it’s available in paperback. To me, or any serious gardener or designer, it is a treasure. You might like to thumb through it before you decide if it is for you, especially if you are a beginning gardener. If you have big spaces to fill, you will get many ideas.

Henry Homeyer’s blog appears twice a week at gardening-guy.com. Write to him at P.O. Box 364, Cornish Flat, N.H. 03746. Please include a self-addressed, stamped envelope if you wish a mailed response. Or email [email protected].