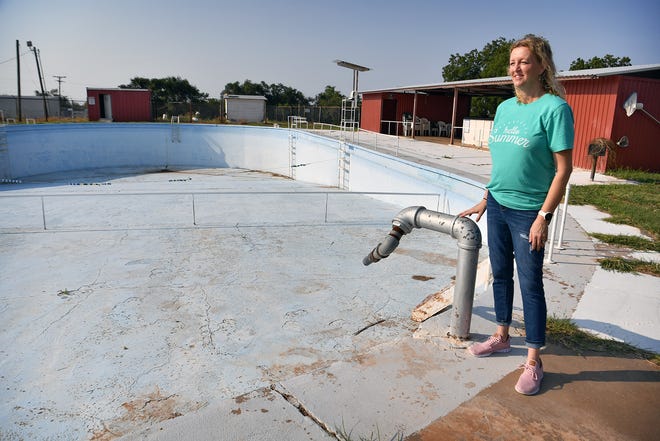 It has launched a $575,000 campaign to restore its historic 1937 Works Progress Administration swimming pool, which has been closed since 2018. The pool is a very dear piece of the community’s rich history, and restoring it is important to help keep those fond memories alive, according to Paducah Pool Committee President Mona Gregory.

“The closing of the pool – this pool had a lot of history. It meant a lot to my mom and dad, to our family members,” said Gregory, whose family has called Paducah home for several generations. “This is one thing we need to keep alive for our community.”

Construction on the city pool began in 1935 and was completed in 1937. The facility is a massive 124-foot by 58-foot pool that holds 330,000 gallons of water, but the 80-plus year old facility was deteriorating and upkeep was expensive, according to City Mayor Rodger Brannen.

The city had done numerous repairs and upgrades to the facility over the past several decades, but the structure continued to degrade due to its age, he said.

Brannen, who was a city council member back in 2018, said he cast a strong “yes” vote to close the pool three years ago.

“I was huge in trying to get the pool closed back then. I did that because I felt it was unsafe,” he said. “But I will do anything I can to get it reopened now.”

This fall, the Paducah Pool Committee held events such as bake-offs, a silent auction, and a raffle to raise funds, and the restoration project has also been successful in receiving grants.

Gregory and the rest of the Paducah Pool Committee are confident that the people of Paducah will rise to the challenge, she said.

Gregory said the city initially explored building a new pool, which would have cost roughly $450,000. But it would have been a much smaller facility.

“Do we restore or build a new one? That was the first decision we had to make,” Gregory said. “But I had 100% of the people I talked to that said restore. There’s a lot of excitement around that. When you hear the number of what it’s going to cost, people take a step back, but they are still excited.”

The restoration will keep the footprint of the current pool but transform the shallow end of the pool into a modern splash pad design. The city hopes to begin construction in summer 2022 in hopes of having the pool reopened by summer 2023.

If you would like to make a contribution to the Paducah Pool Project, you can mail your check to City of Paducah, Box 759, or you can Venmo funds to @paducahtxpoolproject.

For more information about the project, following the Paducah TX Pool Project on Facebook.